Why are gate drivers key in making your electric vehicle battery design a success?

But what is the right technology? The simple answer is that it’s the one that minimises the cost, size and weight of the power conversion modules while maximising their reliability and efficiency. Judged by all of these criteria, designs based on Heyday Power-ThruTM gate drivers outperform their conventional counterparts, giving their users a decisive competitive advantage. Let’s take a closer look.

The cost of a power conversion module is directly influenced by its component count and its complexity, and with conventional designs, both of these are high. For the most part, this is because of the need to provide external DC-DC bias supplies to provide power to drive the gates of the module’s semiconductor switches. In some cases, as many as eight or nine separate bias supplies may be required.

With Heyday gate drivers, bias supplies are eliminated as the power for gate drives is transferred by a novel magnetic coupling device within the integrated circuit. Not only does this reduce component count and complexity, it also cuts costly engineering time as, without the bias supplies, the modules are much easier to design and easier to qualify.

Eliminating bias supplies – which typically include transformers and other bulky components – makes it possible to develop smaller, lighter power conversion modules. The size and weight savings are valuable in themselves, but there are additional benefits. Smaller gate driver assemblies mean shorter signal paths with reduced parasitic capacitance and inductance which reduces the risk of damage caused by ringing and voltage spikes. And smaller gate drivers leave more space for the power stages, allowing more efficient designs to be used.

Reliability also depends on component count and circuit complexity – even in designs where care has been taken to minimise the loading and stress on components, every component remains a potential point of failure. So the reduced component count translates directly into improved reliability, leading ultimately to fewer warranty claims and enhanced product reputation.

For efficiency, Heyday gate drivers offer a decisive benefit: with their unique Power-ThruTM technology, the power consumption for gate control tracks with the switching frequency, so efficiency is automatically optimised. This contrasts with conventional designs where bias supplies must be sized for the highest switching frequency used and will therefore operate less efficiently at lower frequencies.

When embarking on the design of a new electric vehicle, gate drivers probably won’t be the first components to come to mind. Yet, as this blog has explained, choosing the right gate driver technology can cut costs and help in the creation of a vehicle that’s more reliable and more efficient.

To find out more, watch Heyday webinar on OBC and inverter applications: 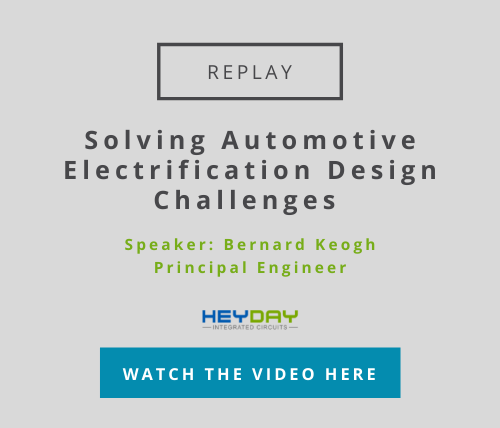 Cost, design time and unexpected problems: these are three of the most significant issues in the...

What are the main technical challenges with power conversion in automotive?

How to avoid the main business hurdles brought by conversion challenges in the automotive industry?

Electric vehicles are currently in a phase of exceptionally...